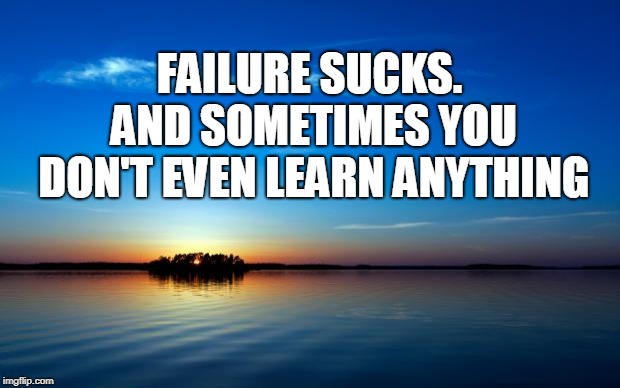 “Fail fast, fail forward”, “failures are dreams that have not come true yet”, “failures are opportunities in disguise”, “no-one ever achieved anything worthwhile in life who didn’t fail at it first.” Our culture has a lot to see about failure and often rhetoric around careers work buys into the same sets of ideas, often in bite-sized quotes in front of pictures of sunsets. In more serious theoretical discussions ideas around employability, planned happenstance, resilience and so on are often shot through with this sort of rhetoric as well. There appears to be a previaling view about failure that sees it as

Now I don’t want to reject this entirely but I am significantly skeptical about all of the above and as os often the case there is nothing more dangerous than a partial truth masquerading as the whole. I want to pull gently on a few threads which I think underpin some of the assumptions that can occur around failure. There are some links between what I have got to say but you may feel stronger about some ideas than others and you don’t need to accept all of them.

1) Careers work is about the individual

Careers work often argues for its value in terms of how it improves things for the individual. As we discussed above this can come through when we see failure as something that is overcome by individuals. This focus on the individual is partly because career practitioners have direct contact with the individual and so it makes more sense, and it feels like there is more permission, to engage on problems at an individual level. Partly, as writers such as Hooley, Sultana, and Thomsen among others have argued, this is because careers work often has a neo-liberal base which sees problems as being individual responsibilities. This ignores that failure is often not caused by the individual but is beyond their control. Even more, it is in the control of someone else, or at least other agents with more power who can do more to change the situation than the individual. When we work face-to-face with clients and hear about their failures we don’t just see a problem that could be solved for them but also solved for other people. It is an opportunity to think through how we could work to change society or provide better to support in society to make things better for lots of people. Sometimes this can seem harder than just telling someone to get over their problems but we need to be careful to not blame people at least for how they respond to their failures or to ignore that what is true of one person might also be true of other people.

2) Uncertainty and failure are equally distributed

Failure is part of everyone’s life, this seems to be self-evident. So it often follows that because everyone will fail it should be normalized if not valorized as a chance to grow and improve. In everyday conversations and online you often hear people saying stuff like “I failed but look where I am now”. Failure is not seen as a big deal beyond how it is constructed in the mind of the individual. Behind this is the belief that failure and uncertainty are equally distributed. It seems obvious though that some failures are more significant than others. Not getting a graduate job on the first time of applying is not the same as losing your job when you are a single parent and have four children to look after. We can talk about failure in a manner that has no contours and doesn’t recognize that some things are sad, painful and significant and then people shouldn’t be just told to get over them. Also, failure is not equally distributed in that people have different resources to cope with and bounce back from it. How people respond to failure can say more about the hand that society has dealt them rather than their mindset or resilience. We should be careful not to universalize what can be a very personal but still socially positioned experience. 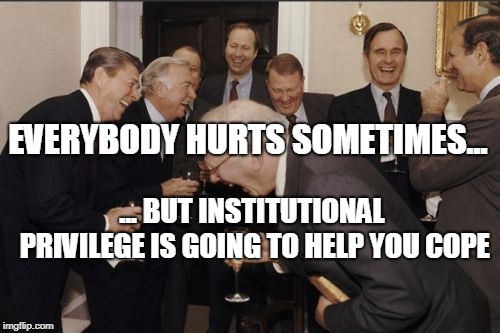 Health warning, this point is slightly more abstract. What I mean is that there is a good life that exists for everyone and we are all working our ways towards this, or at least our own understanding of it. We may never quite get them but we are on a journey towards what we find personally meaningful. Though this may not be exactly said out loud I feel this view of a progression towards the good life often sits behind how we think about a career. This confidence that things can and probably will get better for people sits behind how we think about failure and career. If the above progressive view is true then we will likely think of failure as only part of an individual’s narrative. The philosopher Ernst Gellner describes this as a “world growth myth” the belief that metaphors of evolution and progress describe societal and individual patterns, things can only get better. Now we may be skeptical about the certainty of progress but what Gellner does is challenge the ideological dominance of progress. I would argue we see failure in relation to progress because society has enthroned progress. We would think about failure differently if we were not so obsessed with getting somewhere. Now I am not saying that some circumstances (maybe even lots of circumstances) are worth changing but we should be careful how we think about progress as it can often lead to us making is less important than becoming. Career has become about where we are going and not the here and now and so careers work aims to enable progress above everything which leads back to our current thinking about failure. Thinking about failure should encourage us to think differently about what we and society think of the good life and how it is constructed. There is a danger that a vague sense of going somewhere actually stops individuals and societies asking harder questions about what is valuable in existence. Career can sell a myth of success and value that hides some of the deep uncertainties of modern life. Failure can be a chance to ask these questions which should maybe mean we shouldn’t just frame it relation to success and progress but instead in relation to meaning and value. 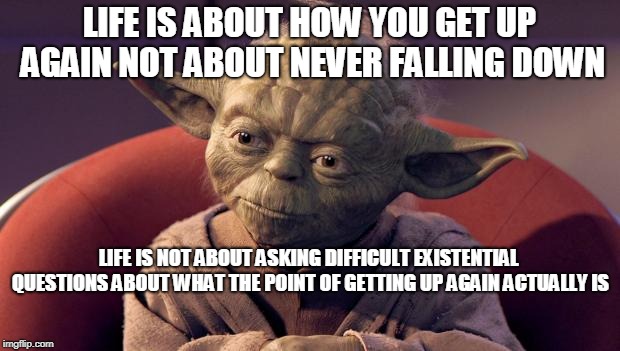 Hopefully the above should give you some food for thought about failure and how you think about it for yourself and for others.

One thought on “Careers Work & Failure: The Failure of Failure?”